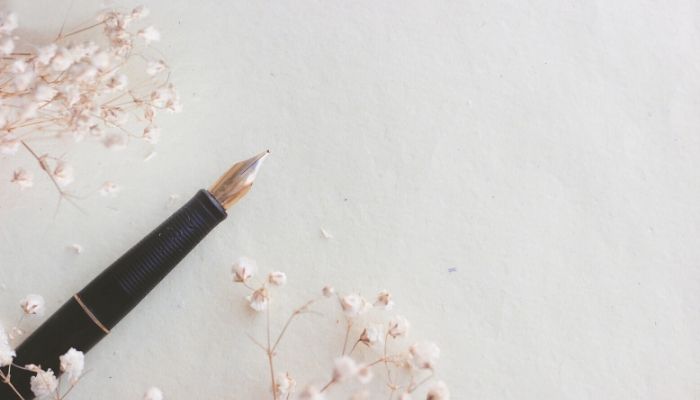 In the modern age of technology, we do most of our “writing” on computers and phones. From work emails to personal text messages, letters and postcards are becoming a rare form of communication.

So much so that many people nowadays consider receiving a handwritten letter something to be cherished.

If you’re interested in calligraphy or you simply want to go the extra mile and write uniquely expressive letters to your loved ones, then you probably need to know how a fountain pen works for a smoother and more rewarding experience.

We’re here to make that happen! Here’s a breakdown of what fountain pens are and how they work.

What are the Parts of a Fountain Pen?

If you want to really understand the mechanism of how a fountain pen works, then we should back up to explain the different parts of a fountain pen and the roles they play in making it write.

So let’s start with the three key parts of any fountain pen:

The pointed metal piece that makes up the tip of a fountain pen is called the nib. You can probably picture the nib just by reading its name since it’s the most iconic part of a fountain pen. In fact, the nib is how you can distinguish a fountain pen from a rollerball or a ballpoint pen.

The nib has a small slit through which it draws ink by capillary action. This ink slit splits the nib into two halves called the tines.

The edges of the two tines are typically coated with a strong metal alloy to keep the quality of the tip intact over time. On the opposite end of the ink slit, you can spot the breather hole, which is a tiny circular (sometimes heart-shaped) hole.

To achieve an optimal flow of ink, the ink slit should get narrower moving from the breather hole towards the tip of the nib.

Inside the handle of a fountain pen, there’s an ink reservoir that carries unused ink. The ink reservoir can be anything between a simple ink cartridge and a complex filling mechanism that’s capable of taking up and storing ink.

The presence of an ink reservoir is a characteristic feature of a fountain pen, as opposed to a dip pen.

The feed is the part that connects the nib to the ink reservoir. It’s located under the nib and is responsible for feeding it with ink from inside the pen.

Generally speaking, a feed includes one main channel and three small ones that utilize capillary action to draw ink from the reservoir and deliver it into the nib.

There’s a set of fins or groves sitting just beneath the nib (may be visible or hidden inside the grip section). This part is called the collector, and it helps regulate ink flow by slowing down the ink coming from the reservoir to prevent it from flooding out at once.

The feed is usually made of plastic, but sometimes exotic materials, such as ebonite, can be used. Also, the feed traditionally comes in a black or grey color, but more colors have been available in recent times.

To work properly, the feed should be sitting flush against the base of the nib, without any clogs in the ink channel or the fins.

The nib, the ink reservoir, and the feed are the essential parts of a fountain pen, but there are other important bits that a fountain pen wouldn’t be complete without including:

How Does a Fountain Pen Work?

To put it simply, a fountain pen works by incorporating two elements: air and capillary action.

The feed system of a fountain pen consists of three small channels for ink and one big channel for air, all arranged parallel to each other. This system allows air to flow upwards into the ink reservoir, and simultaneously, ink flows down towards the paper at a controlled rate.

So, you end up with just enough ink to create a solid line; not too much that it floods your paper, and not too little that it just doesn’t write.

But how does the ink actually get out from the nib onto the paper? You may answer “through gravity”, yet, if you hold a fountain pen with its nib pointing straight down, gravity won’t make the ink pour out because the feed channels are very narrow.

Instead, when you drag the nib over a piece of paper, capillary action will pull the ink down the feed and down the slit in the center of the nib.

Learning How a Fountain Pen Works

There you have it, a full guide to answer the question: how does a fountain pen work? Remember, knowing how each part of a fountain pen contributes to the whole mechanism is your door to truly understand how this fascinating writing tool operates.

The Best Fountain Pen for Journaling

Finding the Best Fountain Pen Under 100